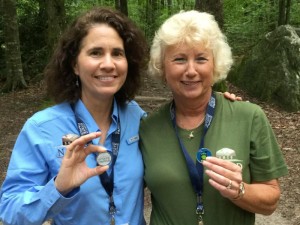 October 5, 2015, I was very pleased and impressed by the 2015 Recipient of the Fran P Mainella Award. She has shown tremendous innovation and activity.

The Award is named in appreciation of the dynamic career of Fran Mainella as the first woman Director of the National Park Service. As Director, she focused some of her many efforts on creating systems of connected parks and developing innovative partnerships to expand services. Director Mainella was previously the Director of the Florida State Park Service and the Executive Director of the Florida Recreation and Park Association. The Award recognized sustained and innovative achievement by a woman in the management of North America’s natural, historic or cultural heritage.

Fran P Mainella AwardThe Fran P. Mainella Award was presented to Priscilla E. Geigis for sustained and innovative achievement by a woman in the management of North America’s natural, historic or cultural heritage.

Priscilla E. Geigis oversees the Division of State Parks and Recreation, which manages over 350,000 acres of public land from the Boston Harbor Islands to Mount Greylock in the Berkshires comprised of forests, parks, rail trails, parkways, beaches, rinks, pools and golf courses providing diverse recreational opportunities for residents and visitors. Priscilla’s love for parks and nature was inspired by her childhood adventures hiking and camping at state and national parks across the country each summer with her sister and parents. She has a particular interest in getting kids (and kids at heart) connected to the great outdoors fostering healthy lifestyles and promoting shared stewardship of our resources. She was instrumental in the development and implementation of DCR’s Park Passport program and Learn to Camp programs, and in bringing Connecticut’s Great Park Pursuit to Massachusetts all in an effort to promote state parks and provide memorable and inspirational experiences for families and visitors of all ages. Priscilla believes that “everyone has a role to play in preserving and enhancing our parks” and created Park Serve Day, which has become one of DCR’s signature, annual events and its largest volunteer day. She co-created Outdoor Kitchen, demonstrating healthy recipes using locally-raised produce to make while camping and picnicking in Massachusetts state parks. She also co-created DCR’s Healthy Heart Trail program which designated 70 easy to moderate 1.5 mile trails across the state to encourage daily physical exercise and a connection to our natural world which was recognized by the American Red Cross. Most recently, she helped launch DCR’s Sponsorship Program to encourage public-private partnerships. Priscilla has served as DCR’s Director of State Parks and Recreation since 2004.

Since 2012, Priscilla has served as President of the National Association of State Park Directors and as a member of the Board since 2005. During her tenure, she expanded a successful Massachusetts program to all 50 states launching America’s State Parks First Day Hikes on January 1, 2012 and serving as the National Coordinator in 2012 and 2013. January 1, 2016 will mark the program’s fifth year in promoting America’s State Parks, healthy lifestyles and year-round recreation. Priscilla also established a mentor program and resource materials to guide new State Park Directors. Priscilla served as Co-Chair for the Children in Nature Partnership with the National Park Service (NPS) and the National Recreation and Park Association (NRPA) developing webinars to share program ideas to connect kids to nature. She was a founding officer of the America’s State Parks Foundation and executed agreements with the NPS and the American Hiking Society for programmatic collaborations. She represents NASPD on the NPS Centennial Advisory Committee and is coordinating a national history project that celebrates the evolution of and the connection between state and national parks to be presented by individual states as NASPD’s contribution to the NPS centennial effort.

Priscilla graduated from Connecticut College in 1987 and began her career in state government in 1992 after receiving a Master in Government Administration from the University of Pennsylvania’s Fels Center of Government and a law degree from Northeastern School of Law. She worked for the Department of Fisheries, Wildlife and Environmental Law Enforcement and the Executive Office of Environmental Affairs prior to her role with DCR.