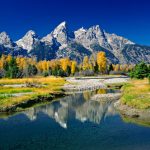 Park professionals on the state and national levels have enjoyed an influx of visitors and interest tied to the centennial.
Image Credit: National Park Service

CLEMSON — Clemson University has enjoyed many connections to the U.S. National Park Service over the last five decades thanks to its faculty in the parks, recreation and tourism management department. The department celebrated its 50th anniversary in April, and its faculty, scholars and alumni will observe another important date when the park service celebrates its centennial on Aug. 25.

One hundred years not only marks a significant milestone for parks in America, but a turning point for the way they are handled by professionals in the field and viewed by the general public. Phil Gaines, director of South Carolina State Parks, is a Clemson parks, recreation and tourism management alumnus and still serves on the advisory board for the College of Behavioral, Social and Health Sciences, which houses the department. He said Clemson’s history and that of national and state parks is interwoven in many ways, just as the future of one will inevitably affect the other.

“Clemson University’s fingerprints are all over the park movement in America,” Gaines said. “The university plays a national role with park professionals to the point that when you’re a part of one of those families you’re a part of the other. That family is taking this time to look back at 100 years of progress, but it’s also making moves to address the future.”

Appealing to the next generation

As always, national and state parks are faced with ecological challenges, but they also must remain relevant to the next generation of park-goers. Fran Mainella, 16th director of the National Park Service and visiting scholar at Clemson, considers the issue of engagement with younger generations as the park service’s greatest current challenge.

“Parks are the soul of our country and they tell our history so they are relevant to all of us, but we’re a much more tech-driven society now, so we have to employ that technology to help people find parks and better understand them,” Mainella said. Mainella said part of the problem is people’s reliance on forms of media that keep them at home in front of a television and near an air conditioner, so she understands recommendations to dump all forms of media and get to the nearest park. However, that can be a hard pill to swallow for the general population, so Mainella encourages people to utilize media as a means to ultimately distance themselves from it.

The park service is currently employing this strategy. According to Beth Stern, public affairs specialist for the National Park Service, the service collaborated with the National Park Foundation to develop the “Find Your Park/EncuentraTuParque” campaign that launched in 2015 for the centennial.

The campaign’s websites, FindYourPark.com and EncuentraTuParque.com, have become popular digital resources for finding information about parks, planning trips and sharing park-specific stories. Stern said the sites were designed to work equally well on tablets, smartphones and PCs, and she believes their introduction and corresponding social media splash has only expanded the network of people excited about the national park experience.

“If you ask anyone under the age of 30 how they get their info, they hold up a smartphone,” Stern said. “We wanted Find Your Park to become a portal to find an adventure, so it’s gratifying to see the campaign take off the way it has.”

While Find Your Park looks to expand the future, the National Park Service has been actively working for years with Clemson researchers to digitally capture the past through the Open Parks Network. The project, funded by the National Park Service and the Institute of Museum and Library Services, acts as a repository for the digitization of cultural heritage objects and literature from libraries, museums and archives of the nation’s parks. The collection currently features more than 1.5 million pages of literature and 350,000 heritage objects and will only grow in the future.

Brett Wright, dean of Clemson’s College of Behavioral, Social and Health Sciences, is part of the team that has made the Open Parks Network a reality. He said the network will put park resources in the hands of anyone with an internet connection, enrich the experience of visitors and further appeal to the next generation of park-goers.

Wright credits the idea for the Open Parks Network to the late George B. Hartzog Jr., the seventh director of the National Park Service, during one of its largest periods of expansion in the ’60s and ’70s. Even decades after his administration he pushed for a seamless system of parks and saw the Open Parks Network as a way of connecting parks across the country.

If Clemson and the National Park Service form one unified family, then Hartzog would be considered a legendary patriarch. According to Wright, as a South Carolina native, Hartzog developed strong connections with Clemson, and its faculty and donors developed the annual Hartzog Lecture Series in Park and Conservation Area Management in his honor.

“One of the shining moments of my career was getting to know George Hartzog,” Wright said. “He was a great man and his work created an enduring legacy. Every director who has served after him has come to the Hartzog lecture, and many come every year.”

During the Hartzog Lecture Series, Clemson becomes a destination for park professionals and conservationists from across the country to share ideas and explore topics critical to the future of parks. Sustainability and strategies to anticipate and combat threats to national and state parks is an issue commonly explored in the lecture series.

Reframing conservation to address the next 100 years

Sustainability is of particular interest to Gary Machlis, science adviser to the director of the National Park Service and professor of environmental sustainability at Clemson. All park professionals are concerned with attracting the public to parks, but Machlis also concerns himself with taking steps to ensure parks are still here for a 200th anniversary.

He has a unique perspective on the relationship between Clemson, national parks and the issues they face collectively. National Park Service Director Jon Jarvis appointed Machlis to the position — the first of its kind — in 2009, and he has been on the ground floor of policy reform related to resource management in parks ever since.

“The goal of the National Park Service starting out was to manage parks as a snapshot in time,” Machlis said, “but these parks are constantly changing. We need to think of them not as a ‘snapshot’ but as a ‘film’ that is constantly changing so we can address issues related to conservation appropriately.”

Machlis is working with the park service to implement interim policies and make them permanent. Under these new policies, park superintendents would be required to have a background in scientific literacy. They would make decisions based on the best available sound science, accurate fidelity to the law and long-term public interest. Machlis and his research are tied to a unique turning point in national park history and he is still in the midst of helping guide the service to contend with emerging issues, such as climate change and unsustainable wildlife populations. After 100 years, the job essentially remains the same. A ranger points out objects in the distance to a couple at Mile High Overlook, North Carolina in August 1957.
Image Credit: Great Smoky Mountain National Park

Gaines sees the professionals behind national and state parks as poised to tackle all the issues before them. While some of the greatest minds and researchers in the field like Machlis tackle issues related to national parks’ longevity and sustainability, park directors like Gaines on the state level are making moves to get people to parks. Gaines said once they arrive, it’s simply a matter of “us doing our jobs,” and he looks forward to the anticipated influx of visitors due to the National Park Service centennial.

“Once people get to parks they make all the connections on their own,” Gaines said. “Those parks become where people catch their first fish, connect with family, propose to their wife or fall in love. [Park professionals] across the country want nothing more than to be enablers for those experiences.”